• Ash & Rain : Great to put Ash and Rain in Arts in the Valley at Kangaroo Valley over the long weekend, from 2 to 5 October, 2020. And terrific that Ash and Rain found a new home! (Image left middle)

• Looking forward to installing Is there Hope @ Sculpture by the Sea in Sydney, some-time soon. We are hoping for November, Covid-willing. (Image right middle)

• In March 2020, Forest Orphans had an outing at Bermagui Sculpture, Bermagui, NSW, Australia. (Image on the right) 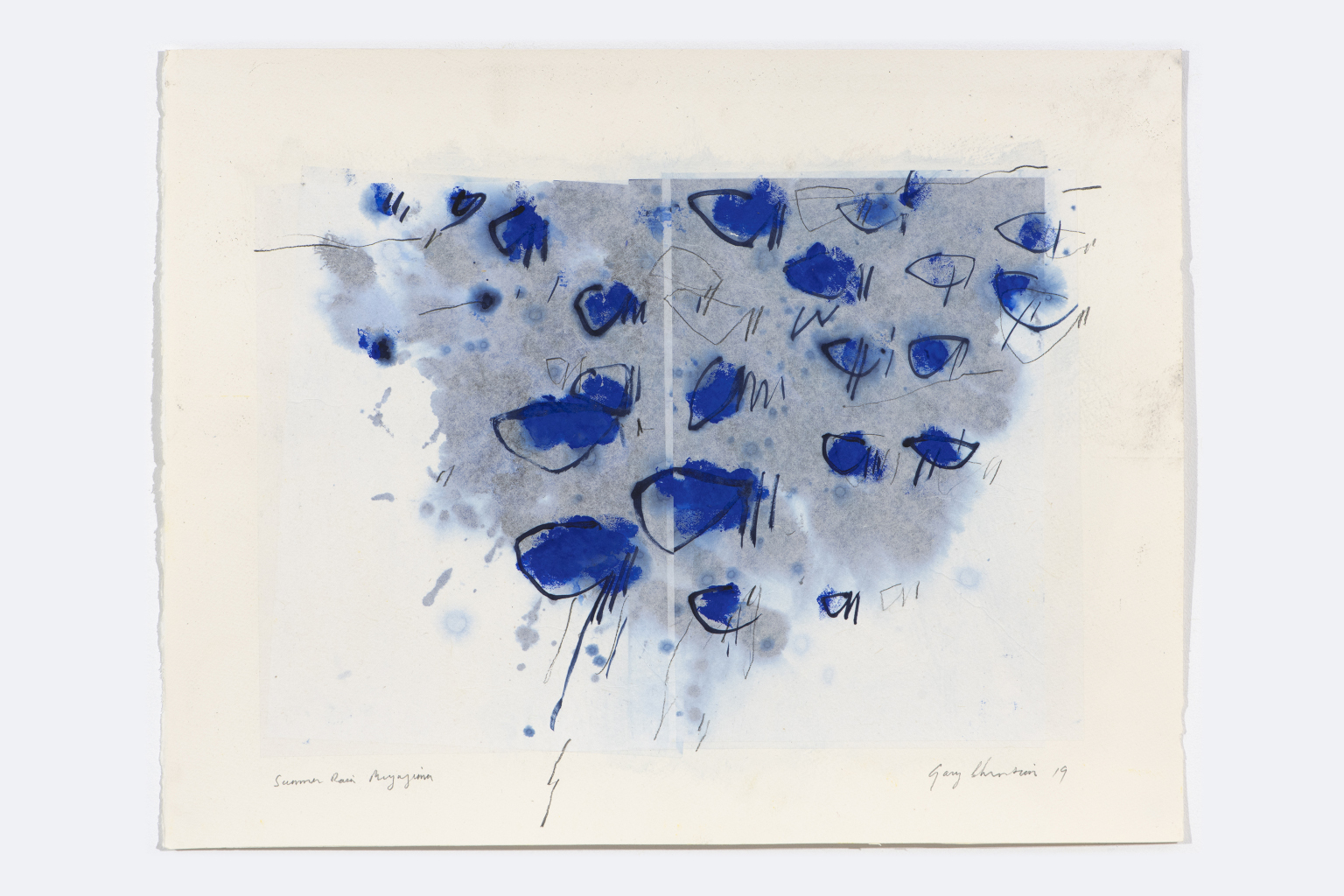 It has been said that the first atomic bomb, detonated at the Trinity site near Alamogordo in New Mexico on the 16th July, 1945 at 5.29 am, marks the beginning of the Anthropocene. That first bomb, and those that were dropped on Hiroshima and Nagasaki in August of that year, were created over 200 miles from Trinity at the secret Los Alamos site as part of the Manhattan Project.

The body of work that resulted in 101 Views of the Anthropocene comes from a research trip I did with my partner. She, writing about World War Two and Robert Oppenheimer (Oppie), the so-called the father of the atomic bomb; me, painting and drawing impressions of the Anthropocene. We travelled first to Japan—to Tokyo, Hiroshima, Nagasaki, and Miyajima, and then to a mountain studio to paint. I love Washi paper and on the way to the mountain studio, bought some in Kyoto. As I painted impressions of places on Washi I was influenced by my appreciation of Zen calligraphy. The final pieces I pasted onto French Archers paper, using rice glue. We then flew to the USA and I carried the Washi paper with me. In USA we went from Boston, to New York, Washington and San Francisco, visiting locations relevant to Oppie and the war. From Albuquerque, we drove to Santé Fe, then Los Alamos. New Mexico is a beautiful landscape of rocky desert land and flat top mountains— mesas (meaning table-top)—that is woven through with meandering rivers and stands of yellow cottonwood trees and whispering Aspens.

Our visit to the Trinity site—only open for two days a year and still radioactive—made quite an impact on me. To walk on this land and think Let’s blow it up! At the gates to the site there were people protesting: still seeking compensation for failing health from the fallout, and for the destruction of family desert farms.

I am an admirer of the Japanese artist, Hokusai, and am in debt to him for his Thirty-Six Views of Mount Fuji. All the sites I painted are in some way players in the making of the Anthropocene. 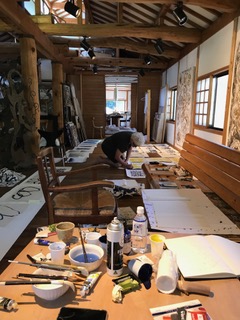 Here I am painting in the studio of artist Kazu Sakamoto in Higashiyoshino, Yoshino District, Nara, Japan. This was a serene experience.

Working in the early morning at Kyoto Studio.

Illawarra Association for the Visual Arts

In Jamberoo, where I live, late summer and early autumn is when we have our most violent storms. I stand in my studio and watch the wind gather the clouds. It’s so easy to understand why certain cultures give so much power to the wind. In violent gusts we see melancholic nature at its most tormented, but also at its most imaginative, most active. From whirlwinds and stormy gusts, bruised clouds and howling winds, poets have imagined the creation of the world.

The Storm paintings are a calligraphic inspired swirl of black, blue-black, and grey acrylics and inks that drip onto papered canvas. They are imagination in motion. Emotional torments within the melancholic reverie. The wind rises from the tormented earth, it is the depiction of our active, demented soul; but it is also positive, as a moving force, a swirling motion of thought and feeling.

There is a forthcoming group show at Janet Clayton. Please come along